With a historic legacy that spans both centuries and empires, Croatia’s unspoiled coastline and clear, uncrowded waters are perhaps one of the best kept secrets of the yachting world. There are hundreds of island dotting Croatia’s Adriatic Coast, many with well-preserved secrets from the Illyrian, Roman, Venetian, Christian, and Habsburg eras to discover.

Explore the “pearl of the Adriatic” and the dramatic scenery of Dubrovnik, including the massive ramparts that make for an impressive and imposing arrival in your private yacht (these are so striking that they even serve as the King’s Landing in Game Of Thrones.

One of Croatia’s pristine national parks makes for a perfectly relaxing stop on the journey. You’ll anchor at Polace on the north coast before exploring the salt water lakes on the nearby interior.

The Croatian equivalent of Capri might even be superior because it lacks the crowds. With an almost surreal blue grotto, a coastline full of nearly-deserted beaches, and an interior filled with olive groves, undiscovered Vis might be the ultimate eastern Mediterranean paradise.

Perhaps the most sophisticated island in the Croatian archipelago, Hvar’s baroque style harbor will be a remarkable stop on your charter journey.

Home to Croatia’s most famous beach, this is the ideal spot for an early morning breakfast, relaxing on a long strip of unbroken sand, and even windsurfing if one feels so inclined.

A stop in the ancient old town Split allows for the exploration of the birthplace of the Roman Emperor Diocletian and experience the historical magnificence these islands are known for.

Meander along the many promenades and cafes of Trogir and enjoy a gourmet meal as your charter journey concludes along the Riva harbor. 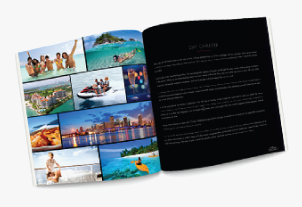